Me In The Press 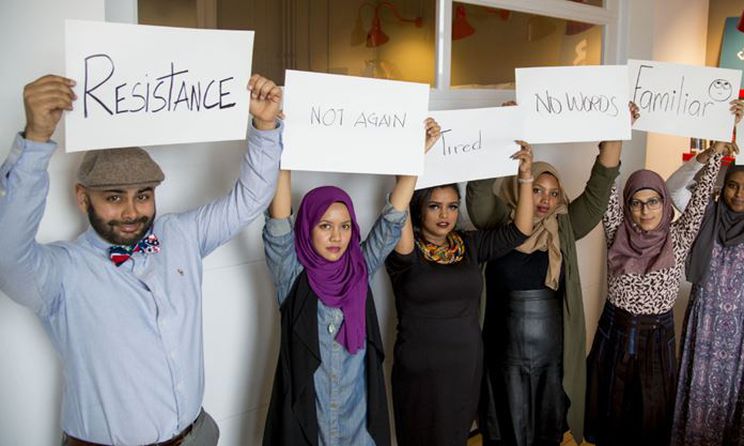 U.S. President Donald Trump’s travel ban against Muslims came as no surprise to Canadian Muslims, though they did not expect how harshly and quickly it happened.

Then came the massacre at a Quebec City mosque that struck another blow to a community already numbed by the Islamophobia its members have faced day in day out in Canada.

A group of Muslims invited by the Toronto Star to a roundtable discussion last week described their immediate reactions to the disturbing events on both sides of the border with such phrases as “not again,” “resistance” and “heavy heart.”

“It’s a familiar narrative. It’s very real in our lives,” said Gilary Massa, 31, whose family came to Canada from Panama in the late 1980s. “Some people say at least we live in Canada. This is what we say to ourselves to cope, but (the shooting) is an unfriendly reminder of how Islamophobia is well and alive in the country.”

Massa, a co-ordinator for a national Muslim advocacy group, said she felt lucky she didn’t have to explain what was happening to her daughter, who is only 16 months old.

For Mississauga’s Farrah Marfatia, also a parent, the response from her 7-year-old son to the events was worrisome. The young boy tried to comfort his mother, telling her it would be OK for them to travel to the United States as long as they painted themselves white.

Marfatia, a school vice-principle who was born and raised in Toronto to Pakistani immigrant parents, said she wondered where he got that from. “That’s not what we want to teach kids, our second generation. Canada is supposed to be our home, but it’s just our house,” she said.

With heightened security and police patrols at the private Islamic school where she works, Marfatia, 37, worries about the effects these events might have on the children’s mental health.

The past week has been exhausting for a community that’s trying to find the space to grieve amid their concern for their fellow Muslims in the U.S. while being overwhelmed by support from well-meaning fellow Canadians who suddenly were confronted by the issue of Islamophobia.

Like many, Shazlin Rahman, whose family moved to Toronto from Malaysia a decade ago, is still trying to digest what all these changes mean to her as a Muslim.

“We have lost our sense of security and safety. A mosque isn’t only a place we go to pray. It is a social hub for us. We can pray at home, but we go there also for social support,” said Rahman, 34, who works at a non-profit organization.

“My parents live in Brantford and they just block it out. Everywhere my father goes, he’s the only Muslim. I have a large support network in Toronto, but they don’t.”

Many of the participants in the discussion were also advised by their families not to speak out about the travel ban and Quebec shooting for fear of retribution. Rahman said she now takes cabs for safety reasons and avoids going to the mosque late at night.

A post-9/11 Canada vigilant about national security and threats by Muslims is all Rania El Mugammar knows, but the 28-year-old Sudanese artist and consultant counts herself as less vulnerable because she doesn’t wear a head scarf.

That said, she said she’s not unfamiliar with discrimination and racism, growing up as a black woman in the city’s St. James Town and Regent Park community.

“You call the cops and you are the ones who get arrested,” said El Mugammar sarcastically. “The community is highly racialized, highly Muslim. We all have this thread of shared fear. You do not have to explain yourself. That’s the only reprieve.”

She said often victims feel they have no one to turn to when bad things happen “even when we are on the terror-receiving side.”

The events have also shaken the faith of staunch community activist Sureya Ibrahim, who has been working tirelessly in community building with Toronto police and the RCMP.

“It is me being naive, feeling it’s my home. I don’t feel that way anymore. There is no rest here,” said Ibrahim, who is in her 40s and came to Canada in 1995 with her Ethiopian family.

Ibrahim said she attended an interfaith event after the Quebec shooting and was glad to see the huge turnout of white Canadians in the audience.

However, she wishes the sympathizers’ support had been just as strong when the community was fighting against the Peel District School Board over Friday prayer restrictions, the York Region District School Board over a principal who posted anti-Muslim messages on Facebook and Justin Trudeau’s Liberal government over the unfulfilled promise to amend Bill C-51, the sweeping and controversial anti-terrorism legislation.

“Tweets are politics. Leadership is action,” said Adil Dhalla, 34, who was born and raised in Toronto to Tanzanian immigrant parents, referring to a tweet by Prime Minister Trudeau praising Canada’s diversity after the announcement of the U.S. Muslim travel ban.https://55cb353ee6edda3059745c7c6d743e33.safeframe.googlesyndication.com/safeframe/1-0-37/html/container.html

Dhalla, who grew up making every effort to hide his Muslim identity to fit in, said diversity won’t serve as Canada’s strength without inclusion and equity.

“The country has to change. We have to be comfortable with being uncomfortable. We have to recognize our challenge. Otherwise, we are no better than what’s happened in the U.S.,” added Dhalla, who is the executive director of the Centre for Social Innovation, a Toronto organization that promotes community collaboration and development.

Inspirit Foundation, whose mandate is to advance social inclusion, said tackling Islamophobia is a top priority for the organization.

“There is much more work to do and this moment underscores the urgency,” said Andrea Nemtin, president and CEO of the foundation, which facilitated the Star’s roundtable discussion.

Massa said it is time for Canadians to recognize the multifaceted identities of their fellow Canadians.

“At what point, should we shed our (Muslim) identity as immigrants?” asked Massa rhetorically. “We don’t want to erase our culture, but the framing of our identity separate from our Canadian identity is a double-edged sword, that we are always just guests, hyphenated Canadians.”

Marfatia said Canadians don’t need to be apologetic but should confront their own biases by recognizing the Islamophobic reality. It starts with education in school by including Islamophobia in the curriculum for children and for adults to be allies against injustice.

Instead of spending money on cultural celebrations and festivals, added Marfatia, governments and community groups should invest in programs that promote systemic inclusion and equity.

A national survey by the Environics Institute last year found 83 per cent of Muslim Canadians are proud to be Canadians, despite experiences of discrimination and unfair treatment.

“We hope we belong here,” said Massa. “But it is more a hope than an assertion.”

What six GTA Muslims say about the ban

Shazlin Rahman, 34, came here from Malaysia in 2007: “(Last) weekend made me feel really sad, not only for the loss of lives, but also the fact that it took this kind of tragedy for Islamophobia, racism and bigotry to register on everyone’s radar.”https://55cb353ee6edda3059745c7c6d743e33.safeframe.googlesyndication.com/safeframe/1-0-37/html/container.html

Rania El Mugammar, 28, moved here from Sudan in 2001: “We knew this was just going to get worse after the election of Trump state-side, so for a lot of us the challenges became very practical. I’m Sudanese Canadian, so my first concern was for my family members who are in the U.S.”

Sureya Ibrahim, in her 40s, came to Canada in 1995 from Ethiopia: “I felt heavy-hearted. I couldn’t sleep . . . I don’t know how to feel anymore. I think all of us could collectively come up with solutions.”

Adil Dhalla, 34, was born and raised in Toronto to Tanzanian immigrant parents: “What’s happening is not right. It hasn’t been right for a long time. Many of us have been saying and doing things to communicate that. Now it is the time that we all need to do something.”

Farrah Marfatia, 37, was born and raised in Toronto to Pakistani parents: “As a Muslim Canadian, we have been experiencing hate and bigotry for years now. I can’t even remember a time when I didn’t experience or we didn’t experience it.”

Gilary Massa, 31, came here from Panama with her family in late 1980s: “It’s been a difficult week. I’ve had no words to communicate the way it impacted us collectively as a Muslim community. How do we heal from this?”

← The Khan Chronicles: Adventures of a School Administrator and Her Two and a Half Children I’m Not Sorry We Aren’t Pretty Enough For You →