Is Islamophobia a Reality at School? How to Talk to Your Kids About It 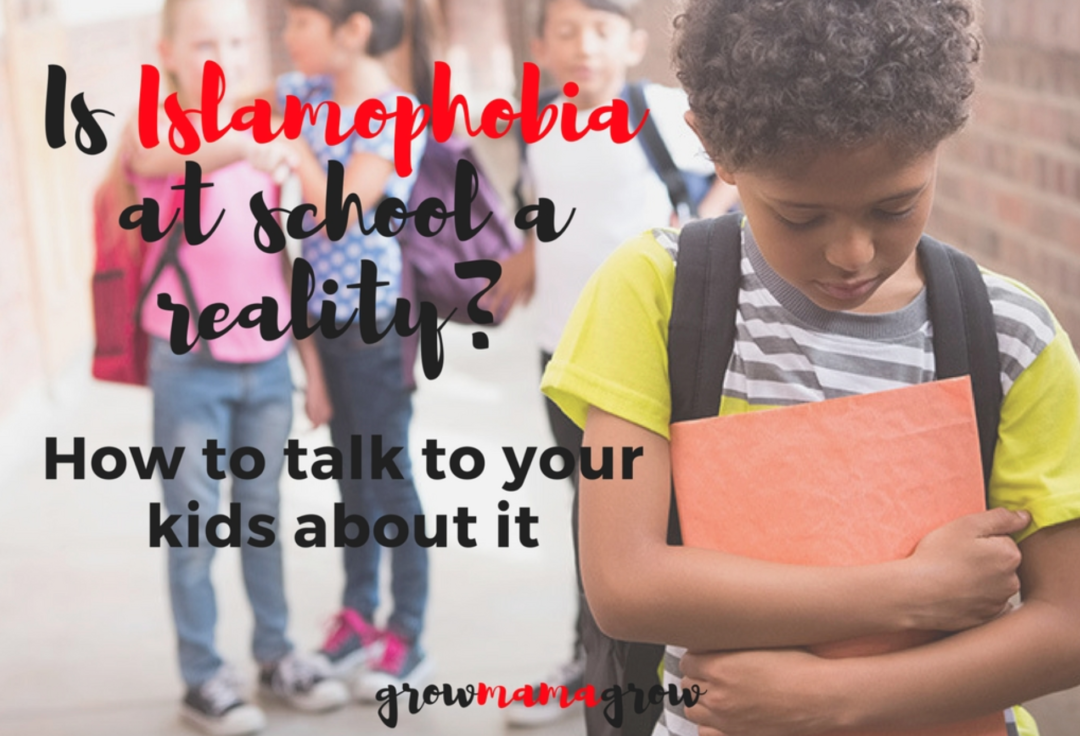 My kids have always been in Islamic School so I have never had to worry about Islamophobia as it related to my own children day to day. Recently, however, my husband and I made the decision to enroll our kids in the local public school and in making that decision I began to reflect on the very real possibility that they would experience Islamophobia at school.

I know what you’re thinking because its exactly what my husband was thinking. Come on Farrah, Islamophobia doesn’t really exist, I mean we live in Canada, it’s more of a US problem. So, I did some research.

It’s clear to me that an Islamophobic sentiment is firmly entrenched in Canada. In the most recent Angus-Reed pole (2013), Canadians held a 54 percent negative view of Islam and according to a 2016 Environics poll, ‘One-third of Muslims in Canada have experienced discrimination or unfair treatment in the past five years due to their religion, ethnicity/culture, language or sex. Such treatment is most commonly experienced in the workplace, public spaces, retail establishments AND SCHOOLS or universities.’

Frighteningly, these sentiments have translated into hate crimes against the Muslim community. According to Statistics Canada, the number of police-reported hate crimes targeting Muslims has doubled over a three-year period, despite the total number of hate crimes dropping. Compared to other religions, hate crimes against Muslims are more likely to be violent. In 2015, the Toronto Police reported that Muslims were one of the top three most targeted victim groups and the second most likely religious group to be targeted for a hate motivated crime

As a former Islamic School administrator, I saw the brunt of these sentiments regularly throughout the years on the school’s social media pages. I saw unsolicited angry faces and comments such as ‘f*** off and take your religion with you’, ‘stay out of America’, ‘Americans don’t want you here’, ‘Islam is un-American’, ‘go home’, among many others.

But is Islamophobia really something that our kids are experiencing in our local public schools?

In March 2016, my former school team and I recruited five different community organizations with expertise in youth mental health, education, and the arts, as well as five young artists to help discuss and address Islamophobia with middle and high school Muslim youth. It was attended by over 50 young Muslims from both public and Islamic schools. In an informal pole, all the student groups reported that they felt that the media made them feel like Islam was synonymous with terrorism and that Muslims were considered terrorists. Eighty-eight percent of the student groups reported that they felt their friends had some negative feelings towards Islam and Muslims. When students were asked “How is Islam perceived by people around you?” students responded with: “oppressing,” “dangerous,” and “my friends think ISIS represents Islam,”.

This past summer, A Quran was ripped up at a Peel Public School board meeting in response to students being accommodated for Juma’a prayers. In addition, high school students were harassed outside of John Fraser Secondary School in Mississauga, by islamophobes who wore t-shirts with slogans such as ‘Stop Islam Save Humanity’ and, using a bullhorn, chanted that “Islam is a rape cult, promotes terror, violence, hate and child sexual assault”, among other things.

Seeing this data made it clear to me that what happens in Canadian society has an impact on students in public schools, after all schools are microcosms of society. So, what are we as parents to do?

Islamophobia is a scary thought for Muslim parents, not to mention Muslim children. But our kids sense our attitudes and if we take a pro-active approach, inshaAllah they will learn to navigate the potential hate as well.

← We are Canadians, but it’s complicated I am woman but sometimes it’s hard to roar: Managing my work-life balance at the intersections of womanhood, motherhood, race and religion →