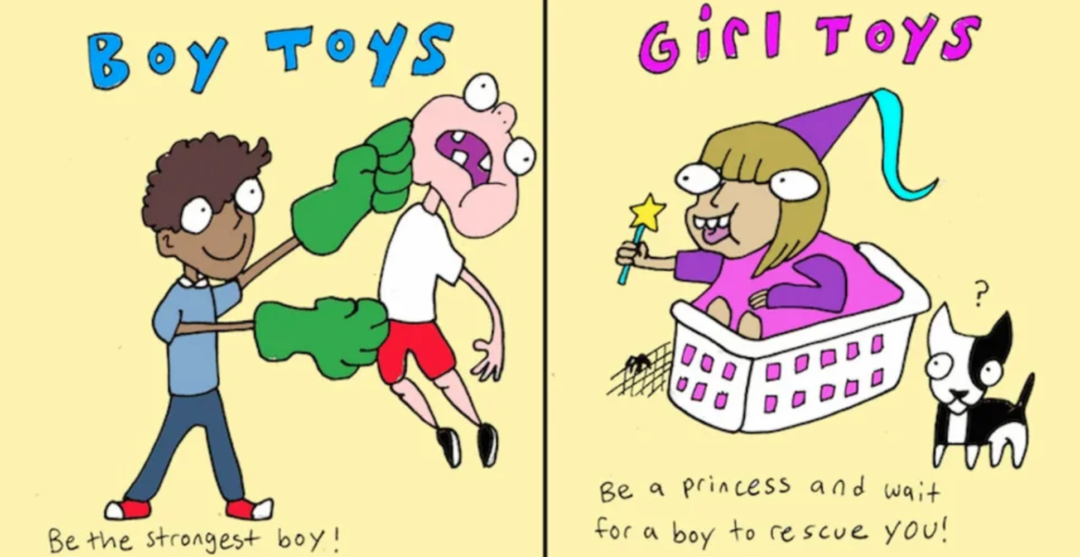 So, you may be surprised to find that I have an issue with the concept of gender-neutral toys. What is gender neutrality you ask? Merriam-Webster defines it as ‘not referring to either sex but only to people in general’.

How does this definition translate into the toy industry? Commonly, it’s taking toys and having them in a variety of colors, EXCEPT for pink or blue so that they don’t suggest one specific sex and by extension a stereotype associated with that sex. Or, it’s removing gender-specific language around a toy itself. For example, Target began to remove gender-based labels in its bedding and toy aisles to address customer concerns over gendered toys [1].

Don’t get me wrong. I understand the merits of having gender-neutral toys. What it helps avoid is stereotyping the sexes into what they ‘ought’ to be playing with. It helps dispel assumptions around their future social roles in society – boys with their hard hats and superheroes and girls with their tea parties and tutus. I like the concept, I am just not sure that it will have the intended effect.

One of the arguments for gender-neutral toys is that many parents feel uncomfortable buying a boy a pink toy or a girl a toy labeled as ‘for boys’. My question is why? My parents were never uncomfortable with buying me model cars and planes to glue together even though they were clearly labeled ‘for boys’. My parents encouraged me to join sports and my dad used to help me practice my pitching regularly. My brothers weren’t embarrassed to buy bath and shower gels from the Body Shop and still do. They have grown up to be sensitive caring husbands who enjoy dabbling in the ‘feminine’. A stereotype is not born from the color of a toy, it is born from those buying the toys and the messages that they are communicating whilst buying those toys. Both my brothers and I used to walk through all the aisles of a toy store and bought whatever we wanted. What my parents inculcated in me and my brothers is that we could do anything and it had nothing to do with being a boy or a girl, let alone a color or a label on a mere toy. It’s parents who lay down the stereotypes at an early age and then it’s the same parents who look for toys to reinforce those stereotypes. Let’s address the root of the problem here – parents with the stereotypes.

Another argument for gender-neutral toys is that they will curb the emphasis on outward appearance for girls and dispel the assumption that boys are tough and interested in action and violence–sending the message to boys that aren’t that something is not quite right with them. I would never want my daughter playing with an over-sexualized doll or my sons to be restricted to WWE action figures – and I make sure that they aren’t. But I don’t think the gender-neutral toy movement is going to fix that per say. I mean have you seen the Bratz dolls for boys? I guess ‘Bravo Bratz’ for having male dolls that have a bit of a feminine vibe with nail polish and a bit of gloss. I guess that’s their ode to gender neutrality. But how has this fixed the problem of focusing on outward appearances? It hasn’t. It’s just projected the problem onto boys.

What about the female superheros I am seeing out there on the shelves, killing bad guys and maiming henchmen? I mean, if my daughter wants to dress like Darth Vader – I’ll be right there with her, as her Emperor Palpatine. But I worry – If you’re not playing with these super ‘heroines’ and are more interested in your easy bake oven and your Barbie are you the new outcast?

Instead of gender neutrality, I counter that first toys need to change so that all children can see themselves in the toys that they play with. I want my kids to have dolls that are the same color as they are, that have the same texture hair as they do and that have story lines of being doctors, lawyers and journalists as opposed to warlords. I want my boys to be proud of helping their mother around the house because that will be their responsibility towards their wives as it was the Prophets (pbuh) responsibility to his. I want my daughter to look forward to being a mother. I don’t want her to be robbed of this type of play because it’s not ‘cool’ right now. After all, one day, Inshallah, Jannah will lay under her feet.

← I’m Not Sorry We Aren’t Pretty Enough For You We are Canadians, but it’s complicated →